Welcome to our Club

We aim to provide our players and their families with a positive team experience, growth in football skills and ultimately an increased enthusiasm for the great game.  No matter what your child’s ability or experience, there is a position on the field for them. 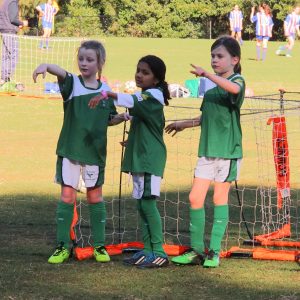 St Ives FC is excited to announce that registration for 2021 season will be  OPEN for all players in mid january 2021; boys, girls, men and women, from Under 6 through to Over 45’s. For all the links, costs and common questions how to - see below

To provide exceptional opportunities that keep people in the game.

St Ives Football Club is proud to support and provide opportunities to our football family for individuals of all abilities to promote inclusion, diversity and collaboration. Our All Abilities programs form the main part of our inclusive profile which are Club run all ability programs.

Our programs consist of non-competitive weekly seasons held on Saturdays. (Gala days are held on the Last Sunday of most months outside the Northern Suburbs). The programs are intended to provide an opportunity to participate in sport, share social experiences and ultimately build confidence.

The Active Kids program, launched in 2018, aims to increase participation of school-enrolled children in sport and physical activity by providing parents with vouchers to help cover the cost of registration and membership fees.

With 44 per cent of children spending more than two hours a day on sedentary leisure activities, the Active Kids program plays a crucial role in shifting physical activity behaviours of children and instilling healthy lifestyle habits.

Families can now access two separate $100 vouchers for each school-enrolled child. This means more kids can get involved in physical activity and learn healthy habits from a young age.

How young can my child start?

Typically about a quarter of our under 6s are aged 4 at the start of the year. A child turning 5 this year is not necessarily out of place; it depends on the child. Players are graded on ability not age, there is a tendency for younger players to be placed in lower graded U6 teams and for those players returning to U6 for a second year to be placed in higher teams. Football Federation of Australia sets a minimum age requirement, your child must be turning 5 in the year of their registration.

Certainly, girls are integrated with the boys up to the age 8. After this, most choose to play in an all girls/women competition (played Sundays). Some choose to remain in the boys competition or play both. Also, some girls who would normally play in the U10s mixed competition choose to move across to the U12 girls team early.

Why are registrations early?

The timetable of events is
- Registrations open from Mid January

If I register am I guaranteed a place?

Each age group has a minimum and maximum team size, at times the number of registrations in a particular age group will be such that it is not possible to accommodate all players. For  age groups  U6 to U12 and adult teams we have  many players so this is normally never an issue . If we experience problems with the U14-U18 age groups we try to assist to  contact the clubs in the adjoining suburbs and hopefully  arrange  for players to be offered a place in either a club- combination or with those other clubs.

Can I register late after teams have been formed?

If  you register after  teams have been formed ( normally  by early March)  then any late registrations can only be accommodated provided these teams have vacancies.

What happens if my child doesn't like playing, can I get a refund?

A full refund is available prior to team announcements. After we announce the team a 50% refund will apply reducing further over time.
Refunds during the season due to injury are subject to committee approval.

Can I pay after grading day?

No. We cannot let a player take the field without insurance and our policy is such that coverage is extended only to those who have a valid registration. If you choose not to continue after grading you can receive a full refund. (excludes active kids voucher until we are directed to pay to another sporting organisation)

Are there any discounts?

Yes. The third and subsequent registration from any one family receives a 10% rebate on the total registration fee. The discount is only applicable if payment is made in full by 25th February. Also, if you are experiencing difficulties paying please contact either our president or registrar.

Why does soccer cost so much/little?

Are my details safe?

Yes, the player details are kept secure on a system that has been in use for many years. Payment details are not accessible to the club, when registering you are passed to a "gateway" that takes payment and provides confirmation to the club that you have paid. The company used for this gateway is the same as is used by paypal and one of the largest such providers in the world.

Can my child play with a friend?

Where and when will I play?

When and where will I train?

How long is the season?

The season normally runs for 18-20 weeks starting in the first week of April. Adult games run each weekend, children do not normally have games on weekends in the middle of school holidays but due to easter and Anzac day holidays this year we will have games for juniors on April 18th (but do on weekends that start or end holidays). For U6-U11 at the end of the season there is a series of "Gala Days" where teams participate in a combination round-robin then knockout short games on a single day. Each team plays at least 2 and as many as 3 half length games. After the season and gala days are completed the club has a trophy day. For U12 and above there are semi finals and finals for those teams in the top 4

Can my child play above his/her age group?

A player can potentially register in a higher age group( maximum 2 years) ,however,  the team they are selected for will be limited by their ability and any vacancy within that team. Decisions to allow a child to play in a higher ager group will be made by the committee in consultation with the parents , the  player and the coach.

Is there a competition, league table etc?

Only U12 and above have published tables of results and standings. NSFA publishes individual match results for ages below this level but does not rank teams against each other. This means each team is able to see its own results but has no idea of which division they are in.

Each age group has a number of divisions, prior to the start of the season St Ives Football club nominates the number of teams in each age group it expects to field and a division for them to play in. NSFA may adjust this nomination to ensure even sized divisions. Once the season starts, junior teams are reviewed several times during the year and moved either up or down a division if their results show them to be out of place.

What do the different team names mean U06, U12w etc?

Who will coach my child?

The coach and the manager for each team are elected from the parents or those with an interest in the team. The club can find coaches at an added cost. Teams that cannot find a coach or manager cannot take the field. The club will support both coaches and managers with training We have mentor coaches located at the showground each Wednesday - 1 mentor coach to 3 coaches to make sure we develop all our coaches in any way we can.

Falling rain does not normally stop play or training, we play rain or shine.
Lightning will always stop play and training.
Grounds may be closed if playing on them would cause too much impact.
In the case of wet weather, the decision to close grounds is made by the local council (usually at 4pm on any day). This information is then conveyed to the sporting bodies.
There are several ways to check grounds closure.

What clothing/gear do I need?

The club provides game shirts to each team which are returned at the end of the year. Players need their own shorts ($22) and socks ($12) which are available from the canteen at Warrimoo Oval (grading days and Saturday morning during the season) along with boots and shin pads also available. We aslo have hoodies, caps, spray jackets and beanies to keep kids warm.